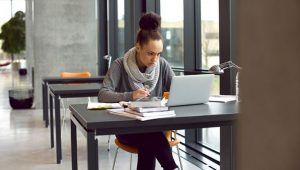 I started college like most folks: 17 years old, with impressive guidance yet no real roadmap. The puzzling question of “What’s next?” was as tangible as ever. My young parents had done well for themselves, but I was the first to graduate high school. At the time, all I knew was that I had a head full of dreams and a heart full of verses. My university attendance appeared to be arranged by divine intervention.

My grandmother, a cancer survivor, lived near Norfolk State University, a historically black college (HBCU) that offered me the most substantial scholarship out of the schools I applied. As my high school’s arts and entertainment editor, I knew the decision to major in journalism at Norfolk State was a no-brainer. Still, I had to juggle responsibilities — my tuition wasn’t exactly tucked away in a piggy bank or a trust fund. Even so, I promised myself I would go to college.

Now, I am not a black woman so I could never articulate a black woman’s experience. But I can say that my time at an HBCU as a Latina, was a relatable and beautiful encounter. I wouldn’t change my unforeseen path for anything.

I’m originally from the Bronx, N.Y., where I grew up with only black and Latino faces in my community. Still, when my family relocated to Virginia, the next Puerto Rican family couldn’t be spotted for another eight miles. I was a unicorn. My time at an HBCU wasn’t as much of a culture shock to me — I’ve always been the Boricuagirl.

My professors covered topics they certainly wouldn’t add to a syllabus at a predominantly white college. Trust me, I’ve cross-studied. Let’s not dance around the particulars. Historically, black and brown faces were innovators for much of which they are not credited for presently. My professors made this known. If I attempted to slip quietly through the back classroom door, Dr. Jackson would halt her discussion. “So nice of you to join us seven minutes tardy to the party, little Puerto Rico,” she’d call out. There’d always be a roar of laughter to follow. Again, I was a unicorn.

On the other hand, it was at my HBCU that I learned about Mesoamerican literature. I felt vested in knowing Latinos were some of the first to curate. I gained hands-on experience at both the newspaper and radio station. Every opportunity was proven useful. I learned how to polish my craft and developed in my ethos.

The campus unity I experienced during celebrations surpassed anything I’d been exposed to before. Truthfully, I attended a friend’s homecoming at a far less cultured university, and it was an utter snoozefest. The campus wasn’t as lively, and the band was trash. You don’t know what a real school band is if you didn’t attend an HBCU.  You’ve never seen strolling unless you have watched the divine nine party-hop. YouTube it! There is nothing like it.

I loved being in college. Occasionally, I heard a “What’s she doing here?” in the distance, but only from other women. With the exception of one sexist professor, I can’t think of a man who opposed seeing me at my HBCU. During one lecture when I didn’t respond to his advances, he fired back with,  “I know you speak Spanish but you apparently do not understand English too well.” I flipped a desk over and told him to “understand that!” The lecture hall was stunned as I departed in a ball of flame.

This was not the first of my negative encounters.  Once, a cousin visited my dorm room to straighten my kinky coils. Then, she wrapped my doobie tighter than a Dominican stylist on Dyckman. Without a second thought, I walked out wearing bamboo earrings, a double-plated name chain and a head full of bobby pins. Before I could drop my garbage in the can, a fellow student asked, “Why do you wrap your hair? You aren’t black.” In New York City, “Latinas” and “roll and sets” are synonyms. However, this Southern girl wasn’t too happy about my presence. Not only had she reminded me I was Latina, but she claimed I “came here to steal away black men.” Girl, bye!

To those who just didn’t “get” my presence there, I wasn’t attending my HBCU to get a college education. Obviously, I didn’t choose this location to be a caregiver to my grandmother. I was just black boy crazy.

I won’t shy away from the facts. There was a 95% chance my boyfriend would be black. I’ve never had to steal a man from anyone, I don’t play second fiddle. I’m proud to be a first choice kind of lady. Nevertheless, like my grandmother figuratively referred to her coffee, she also prefers her man, “black, sweet and strong.” Same abuela, same!

Overall, I was fulfilled by everything I overcame in college. My father saw his daughter win internship positions and become the first Mercado to earn a degree. I broke our dysfunctional family chains.  My grandmother and I took care of one another. I wrote a front-page article on President Obama. I fell madly in love. I became devastatingly heartbroken. With no money, I was resourceful enough to make my own way. That HBCU helped me discover who I am and what I am made of. It prepared me for hardship, the jabs the real world soon threw at me. It was indubitably a blessing.

By Bianca Alysse Mercado via Latina.com