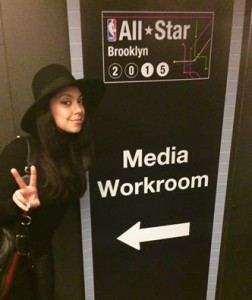 Growing up my brothers and I used to anxiously  gather around the living room waiting to see who had the craziest dunk at All-Star Weekend. Year after year, there were bets placed on the greatest hooper along with plenty of trash talking.  I was usually outnumbered. I am a loyal Knicks fan and it’s been rough since Patrick Ewing left. Carmelo Anthony brought fame back to MSG but he isn’t New York’s savior. I take that back… in a Puerto Rican household, he and his Boricua flag tattoo are godlike.  My little brother wouldn’t accept this comment without a fight,  “How would a girl know about the NBA?'” This year it’s safe to assume I know enough, considering I was sitting directly behind the athletes at #BKN2015. The footage doesn’t do the experience justice but here are my favorite clips from the spirited night. -footage via NBA