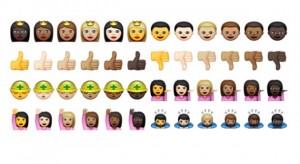 The day has finally come: you can now send iMessages using Emojis that actually resemble your friends and family.

Apple has created 300 new Emojis, some of which highlight different races, professions, and sexualities. In addition to adding different skin tones, the iPhone creators have also added gay couples and same-sex parents to the selection of Emojis.

An Apple spokesperson told PC Magazine: “Apple supports and cares deeply about diversity, and is working with The Unicode Consortium to update the standard so that it better represents all of us.”

According to NPR, Unicode — a nonprofit that sets standards for software internationalization standards — decided upon the colors for these Emojis based upon a system created by Harvard dermatologist Thomas Fitzpatrick, the “father of academic dermatology.” He created a scale to assess how different complexions respond to UV rays. They also kept the yellow color, which has long been the standard for generic, non-human Emoji characters.

No word yet on whether or not a taco Emoji will be included, or whether or not we’ll be seeing more flags from Latin American nations. What new Emojis are you hoping to see?