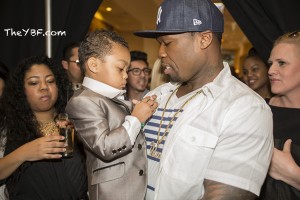 Cuteness overload! 50 Cent’s son Sire Jackson made his runway debut at a fashion show to kick off L.A. FashionWeek yesterday. And he’s melting our hearts! Peep the pics of the tot and his parents cheering him on inside….

After nabbing a six-figure modeling gig, 50 Cent’s son Sire Jackson made his debut as a kid runway model yesterday. The 2-year-old tot was tapped to walk in the Isabella Couture kids couture fashion show to kick off L.A. Fashion Week. And he had his dad 50 Cent and mom Daphne Joy in the audience beaming with joy as they showed their support. 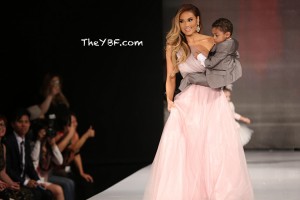 As little Sire made his way down the runway, he got a little nervous, so his mom hopped on stage to walk her baby boy down the runway. Awww….If you haven’t heard, Sire is the new face of an audio company, Kidz Safe, where he copped a $700,000 modeling gig. Kidz Safe is a collection of headphones for children with volume safe technology to help protect children from hearing loss. It makes sense little Sire was able to nab such a lucrative deal being that Kidz Safe is an extension of SMS Audio—the audio company where 50 Cent is the majority owner.We’re sure 50 is one proud dad…of at least one of his sons.