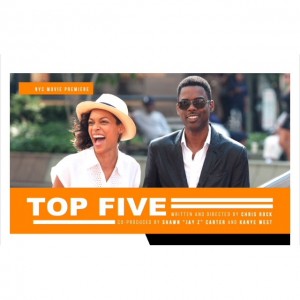 Chris Rock walks in the theatre and yells, “Hello New York City! This is the tastemaker’s screening of Top 5. The film is written and directed by me and co-produced by my friends, Jay-Z and Kanye West. If you have good things to say, great, if not SHUT THE F*CK UP”! And, just like that, he vanished in a cloud of laughter.

Toronto International Film Festival was in an emotional whirl over Top 5 when Paramount won nearly 13 million for the film.  Rock wears many hats, as he also stars in Top 5. Comedian Andre Allen’s (Chris Rock) biggest career savior is his reality TV/socialite fiancé (Gabrielle Union). The New York Times Journalist (Rosario Dawson) has a knotty relationship with Andre Allen, pressing him to answer grim questions, like, “Why aren’t you funny anymore?” Damn.

Special Appearances include Kevin Hart, DMX, Cedric The Entertainer, Tracy Morgan, Jay Pharoah, Leslie Jones, Sherri Shepard, J.B. Smoove and more. The Film is a riot from beginning to end. Top 5 will release in limited theaters on December 5th and go wide on December 12th, 2014. The film is a hilarious 5 star experience from a 5 star cast.