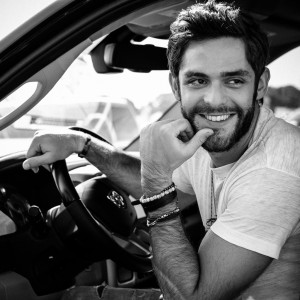 Bio: Thomas Rhett Akins, Jr. (born March 30, 1990), better known by his stage name Thomas Rhett, is an American bro-country singer and songwriter. He is the son of recording artist Rhett Akins. Akins has charted five singles from his debut album It Goes Like This, including the title track, “Get Me Some of That” and “Make Me Wanna”, all three of which went to number 1 on Country Airplay. Rhett has also written singles for Jason Aldean, Lee Brice, and Florida Georgia Line. Thomas Rhett’s new album “Tangled Up” has charted the singer with two more number-one songs, which include his singles “Die A Happy Man” and “Crash and Burn.”