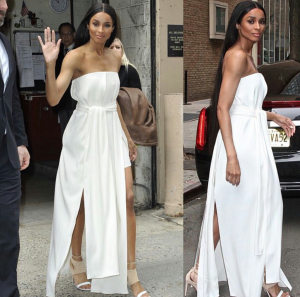 Ciara kicked off Easter weekend with an early morning visit to “LIVE! with Kelly and Michael.” Fresh off announcing her May 4 album release date, she took the stage for the first televised performance of her single “I Bet,” which is currently No. 43 on the Billboard Hot 100.

Looking elegant in a long white Maison Rabih Kayrouz dress, she and her band performed the acoustic version of the Harmony Samuels-produced song, which will soon get a dance remix from Joe Jonas, T.I., and DJ R3hab.

She will launch her first tour in six years on May 3, a day before her sixth album Jackiearrives in stores. The title was inspired by her mother. “Now that I’m a mom, I can understand what it’s like to be in her shoes,” she said.

While she promotes the album, her father is serving as nanny to her nine-month-old son Future Zahir Wilburn. “He takes the job very seriously. It’s the cutest thing,” said CiCi.