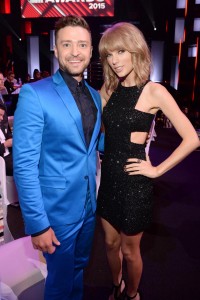 At last night’s iHeartRadio Awards in Los Angeles, Justin Timberlake let his prankster side out to play.

When his pal Taylor Swift won the award for best lyrics, she launched into an over-the-top expression of shock. (This time, though, she was poking fun at her old self.) But while Swift was busy OMG-ing, Timberlake expanded the joke by getting up in mock surprise, pretending he was going to give the acceptance speech for her. Swift, of course, thought this was hysterical.

Timberlake went home with the night’s Innovator Award, which, ironically, is similar in title to the Visionary Award Kanye West received at the BET Honors earlier this year. Soon, maybe they’ll fuse into the same person!