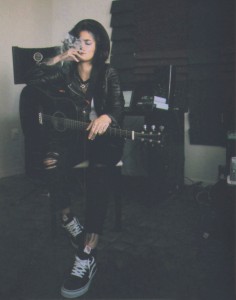 The Bay Area native got her start as a dancer — both ballet and modern — and attended Oakland School for the Arts. After an unfortunate knee injury leaving her unable to dance she transferred into vocal training and the rest is history. She began her journey into the music business when she joined Poplyfe in the 8th grade and hasn’t looked back since — even appearing on America’s Got Talent with the band. Influenced by Lauryn Hill, Michael Jackson, India Arie, Stever Wonder and Musiq Soul Child — she has an old soul while adding her own youthful twist to classic sounds. The best way she can describe her music is “feel good music” with R&B/Soul undertones. At only 19 years old, she has shared stages with Tony! Toni! Toné!, Stevie Wonder, Jamie Foxx, Sheila E, Lenny Williams at many historic venues including Caesars Palace, The Fox Theater, The Paramount and Yoshi’s.