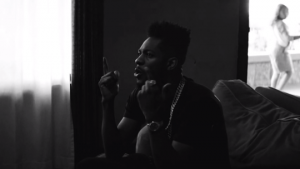 Kendrick Lamar, J. Cole, King Los. Yes, there are prominent rappers who value substance. King Los, who released his major label debut,God, Money, War, on Tuesday sparks deep thought with a new short film named after the album. Though the video is only 2 minutes and 19 seconds long, it manages to address God, money, and war with separate storylines all depicted in black and white footage. Using lyrics from his song “Lil Black Boy,” “God” is a father’s endearing message of hope to his newborn son. The visual simply follows a maternal figure pampering a precious infant before laying him down in his crib.

For “Money,” the story finds two young males in a car, enthusiastically rapping and beatboxing. Moments after rhyming about repping their city and dismissing their detractors, a hooded figure approaches the vehicle, the screen turns black, and a series of gunshots fire off. 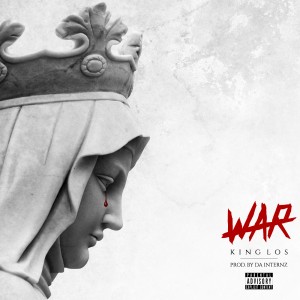 On the surface, “War” appears to be about the violence. King Los, now back inside of the house with the mother and child, sits on the coach reflecting as images of protests play on the television. But his concluding lyric alludes to a deeper issue. He raps, “Not the war with the bombs and the helicopter swarming / But the war for your soul / That’s what everyone’s ignoring.”

The album is just as good.