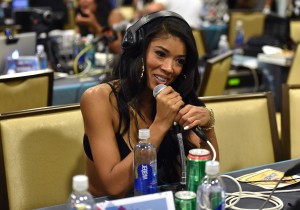 Bio: Jamila Akiko Aba Chilombo (born November 18, 1982), known as Mila J, is an American singer, songwriter, rapper, and dancer. She is known for being in Prince’s video for “Diamonds and Pearls,” and was part of two short-lived girl groups called Gyrl and Dame Four, and appeared on tracks by RaRa, IMx, Trey Songz and Omarion. She released several singles in 2006–2009 under the name “Mila J,” and then went on a hiatus for a number of years before returning as “Japollonia” in 2012 and then reverting to her stage name as Mila J.

She is currently signed to Motown, and released her debut EP entitled M.I.L.A., which stands for Made in Los Angeles on October 14, 2014. Currently, she’s working on her debut full-length LP due to be released this Summer, 2015.