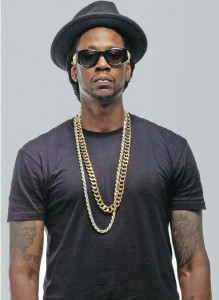 Dominating the Hip Hop charts in 2012, rapper 2 Chainz evolution from his former days on the Disturbing Tha Peace label as “Tity Boi” was astonishing.  The Atlanta native has overcome an array of musical obstacles. His trap sound and rambunctious persona draws a plethora of dissimilar fans.  Song features, such as, double platinum selling “Mercy” on the G.O.O.D. Music compilation album “Cruel Summer,” were deemed some of the most successful of 2012.  2 Chainz first solo album “Based on a T.R.U. Story” solidified him as a top MC in mainstream Hip Hop and transitioned him towards his most paramount success to date.  Tracks such as “No Lie” sold over 1 million digitally and “Birthday Song” peeked on the Top 10 of the Billboard Rap Charts. 2 Chainz is currently touring Europe and headed to make a huge impact on the industry.