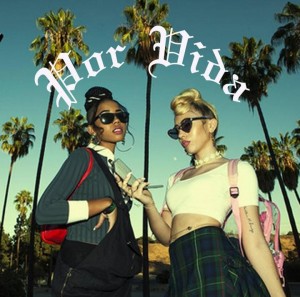 It’s no surprise that the poetic child, living in a graffiti covered home, blossomed to become the heterogeneous artist Kali Uchis. The charismatic songstress reminisces on growing up in Columbia. “It was dangerous in our neighborhood. My family kept close watch over me. I was rare, far too fair-skinned and blonde,” said Uchis. Populaces believed the blonde and fair-skinned were worth money and would go on to become actresses or superstars. At the time, kidnapping in Columbia was very common; her family found it in their best interest to move to Virginia. The irony, that assumption was spot-on, as the bilingual beauty is currently booming through notable speakers.

Kali Uchis followed her destiny straightaway. Whether she was playing her saxophone, exploring her piano or winning elementary school competitions through spoken word, music was ‘it’ for her. With inimitable, rebellious musical influences, such as, Billie Holiday, Aaliyah, M.I.A. and Amy Winehouse, her soulful sound blends so well. She belongs to no distinct genre and all you hear pours from within her. Catching the attention of phenomenal Universal Music Publishing Producer Jay Fresh Kicks commenced Kali Uchis’s crusades towards fame.

Soon to follow Kali Uchis’s stimulating wave, were the musical likes of legendary Snoop Dogg, Diplo, A$AP Rocky and Chris Braide. “JFK found me right after I released my first mixtape Drunken Babble. He was the first person to reach out to me and initially I wasn’t responsive. I couldn’t believe anyone would want to help me,” said Uchis. “When you do anything with your whole heart, it has to work out though,” she continued.

Leaving everything for music, she established herself against all odds. JFK believed in her and was adamant about going out and creating her buzz. A year later, Kali Uchis is the indie artist being sought out by supporters in far corners of the globe.  She is the unabridged package. With no instructions, she writes her own music and styles herself.

She recently introduced herself on NYC’s Powerhouse Hot 97: Who’s Next Showcase. Subsequently, Kali Uchis is appeased by prominent feedback. Deeming music as the most powerful force in the world, Uchis interjects, “Did you know it’s scientifically proven that music changes things in your brain! Music sets the vibe for you. Like how great do you feel after listening to Bob Marley?” Her genuine enthusiasm sets her apart from the puppets and the beauty queens with limited vocal abilities.

The melodies she sees in her head immediately translate on her notebook, out of her body and into your speakers.  Thousands of YouTube viewers are unable to deny her relevance because she follows no trend. Kali Uchis is hot because there is no musician like her. She is an originator who does exclusively what feels to be organic. This Hispanic blending pot transcends to all cultures. A pure representation of the dreamers, the expressive, the stunning and radical, is Kali Uchis.

Keep Up With Kali Uchis: