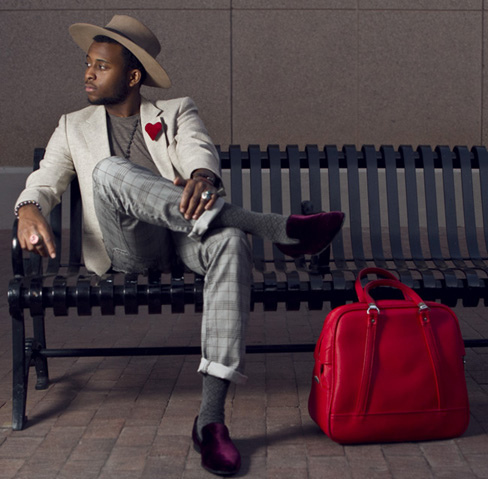 Most care to be seen while the upcoming star The Original Saku simply wants to be heard. His eclectic voice resonates over eerie beats and the electric sound is incomparable. Listeners cannot sensibly label The Original Saku’s musical genre. Saku’s individuality places him in a league of his own. “All I’m doing now is making the music that I want to hear,” said Saku.

With an impressive ear for music, Saku acknowledges legends such as, Sade, Bob Marley, Outkast, Kanye and Prince as his musical influences. Furthermore, he feels incredibly indebted to the ultimate musical genius Michael Jackson. Having love for such substantial artists, quality sound now seeps into his music. Saku may be a young man but he has an old soul. “I was raised in a very old fashioned way,” said Saku. The Philadelphia born artist moved to Woodbridge, VA at the age of two. “I remember on holidays, driving back to Philly and all we would listen to is smooth jazz. Since then, I’ve been intrigued by how atmospheric jazz is and how it would always capture the mood I was in,” he continued.

Jazz had a huge impact on his musical creativity. He quickly learned to successfully capture his listeners’ mood. Saku initially explored his craft through his first musical group Tekna Polyphonic. The creative individuals eventually parted ways and Saku further tapped into his potential by embracing his own uniqueness. Upcoming fans will find it refreshing to press play and not hear songs about Saku flaunting Louis and sexing loosely. HollaFame Music artist Badio, as well as, CEO Jay Fresh Kicks boldly believed in Saku’s message of self-reflection, promoting peace, prosperity and righteousness. “They’ve been looking out for the best of my interests as an artist so it’s been great to be a part of a team that believes in me,” said Saku.

Newcomers can anticipate a bit of everything. Do not place Saku in a box.  “When creating music I just want to be free, and open up the door to these so called genres where I can come and go as I please… but at the same time I’m still myself,” he said. Naturally a trendsetter Saku creates best when he is alone and encourages “people to be themselves. We are all different if we are who God intended us to be.” Be prepared for official collaborations, vivid shows, excellent music and florescent visuals from Saku.

Keep Up With The Original Saku: