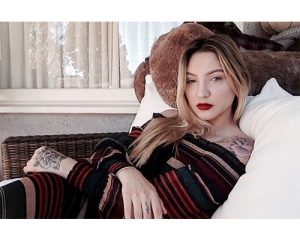 There’s a music socialite hiding in plain sight. Chances are you’ve unknowingly been dancing and singing terribly (no shade!) to singer/songwriter Julia Michael’s records, like her mega-hit “Issues.” She has helped a ton of your favorite artist climb up the charts, but now the girl who avoided being the center-of-attention is taking center stage — alone.

Get to know this rising star in just seven clicks:

The Girl Loves Her Culture

The 23-year-old sensation is a proud Mexican-Puerto Rican. Look at her reppin’ her Latina pride with the Instagram caption, “When you’ve absolutely had it with being sick so you dress up like the true Mexican/ Puerto Rican that you are. #mexican#puertorican #proud” We’re loving her off-the-shoulder Frida-esque blouse, too.

This is Her Teenaged Love Affair

She would tag along to her older sisters’ studio sessions as a child. However, her songwriting began professionally at 16 years old. Michaels has written everything from commercials to Disney’s Austin & Ally, to waxing 12 mega-hits on Billboard’s Hot 100. Check out her pen game on Selena Gomez’s, “Hand To Myself.”

Her Fixation Began Early On

Words were her first love. As a child, she’d write her mother poetry. “I just remember really ­loving words and ­writing about anything I could – and the way I’d ­remember things, like my library card ­number, was to make a melody,” Michaels told Billboard.

Michaels always identified as a songwriter and her tattoos explain her story. She has a treble clef on her middle finger. Her arm is decorated with a microphone, piano, typewriter, and a faceless woman, because she’s used to creating from behind-the-scenes.

Her Looks are Deceiving

At first glance, you may assume Julia Michaels is a badass. However, her introverted personality almost kept her from becoming a solo artist. Her breakout debut single was the first record she couldn’t see any other artist singing. Watch how her personal experience with her perfectly imperfect romance pans out in the video.

Her Co-Written Songs Have Accumulated Over 8 Billion Streams

She has written songs for Demi Lovato, Justin Bieber, Fifth Harmony, Britney Spears, Ed Sheeran and more. Jam out now to her sexy lyricism on Fifth Harmony’s “All In My Head!”

Her “Song Husband” is a Rock Star

Justin Tranter is an equally in-demand Top 40 songwriter. Over the years, he and Michaels collaborated on radio smashes, such as Hailee Seinfeld’s, “Love Myself.” They are bonafide magic. You can see and feel their love in this extra cozy photo.