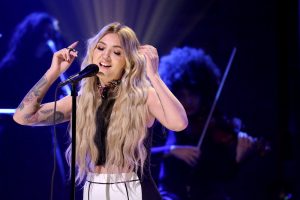 Michaels first emerged in the spotlight wearing an emerald green catsuit, and sky-high golden heels at the 2016 Summer Olympics in Rio de Janeiro.

Yes — she’s always doing it big! Her debut single “Issues” has already gained over 200,000,000 streams on Spotify. We had time to chat with the millennial songstress about her chart-topping career, the meaning behind her incredible tattoo, her message to fellow Latinas and more.

Read it all in our exclusive interview below:

You were behind the scenes songwriting for many years. What was the most frightening thing about stepping into the spotlight?
I think the scariest thing was being seen. I’ve hidden behind people for a long time, and you get used to that. You know? It’s not something you want to get used to because you limit yourself.

You have a faceless woman tattooed on your arm, how is that connected to your music?
I inked it a year or two ago to symbolize my anonymity in the music industry. She has a geometric pattern on her face, while the rest of her is very vibrant and colorful. Following the faceless woman, I got a tattoo of a geometric heart. In the heart, there is an eye crying. I think that is my way of saying I am showing who I am a bit more. I’ve been showing my vulnerability a little more. I have quite a few tattoos. My first tattoo ever was a microphone.

How are you handling this transition from being a songwriter to becoming an artist?
It’s been overwhelming. I wake up in a new place every day like, “Where am I again?” [Laughs] It’s also been rewarding, seeing all the support from my fans, friends, and everybody that I work with is beautiful!

You started going to the studio with your older sister. Do work together?
She still makes music, but I try to keep everything separate. The family is family. My boyfriend is my boyfriend. Work is work. I try to compartmentalize everything.

Speaking of the boyfriend, previously, you were writing about other people’s experiences. What is it like now that you’re telling the world your own?
Honestly, I put a little of myself in everything I write. It may be someone else’s story from the outside world, but [writing] is a collaborative effort in the studio. Writing for me hasn’t changed. I still write from my perspective, from my experiences. It’s just that now people are seeing that it is me.

Who was your favorite artist that you’ve collaborated with?
My favorite artist to work with was probably P!nk. She is amazing. She is one of the most real, and honest people I’ve ever met. Her voice is as authentic as her.

It speaks to your talent considering your first single went platinum. Music seems to be written in the stars for you, now that this solo move is happening. What can we anticipate in 2017?
I’ll be putting out new music for the summer, and I begin touring soon. I try not to think too far ahead; it overwhelms me quickly. However, I’m doing the Radio Music Awards. There’s a lot happening, and I need to stay focused with this. I say my EP is coming out first, but I’m such an indecisive person that it may be an album. I am writing every single day. I could say the EP is coming out now and drop a double-album by May. [Laughs]

You’re quite the overachiever. What is your message to young Latinas?
I don’t want this to sound cheesy, but just be yourself. Be proud of who you are.

In regards to the mainstream representation of Latinas, do you feel we are given our just due?
Now more than ever Latinas are in the spotlight. Some of the biggest artists are out are Latina. Like you mentioned, look at Demi Lovato, Selena Gomez, and Camila Cabello. Take a look at Fifth Harmony. I feel now more than ever we are in the spotlight.  Right now it’s critical, especially in this new America. It’s good to see diversity. There is real culture wins. Luckily, I work in a very diverse community of songwriters and artists. I’ve never face cultural bias, but I do happen to be the only Latin songwriter in the room – and not only Latin but a woman. I’m usually the only songwriter in the room that is of some type of Latino descent. We’re rare! [Laughs] We are very rare!

If you could sum up yourself, how would you describe Julia Michaels?
That’s tough. I am a determined person, someone who is not afraid to be an open book or tell you who I am, right off the bat. I’m a songwriter. Well, I’m an artist!

What are you manifesting yourself?
Right now, I’m focused on the album. I don’t want to give anything but my best. Hopefully, I’ll get over my performance anxiety. That would perfect!

I find that fascinating since you just jumped right into performing at the 2016 Rio Olympics.

Yes! Thank God you wouldn’t assume I have anxiety. The Olympics was terrifying. [Laughs] There was a whole thing where we were delayed in JFK Airport for 19 hours. My team had already flown for 6 hours from LA. Then we had to fly another 10 hours to get there. At one point we were even going to turn back. We just thought, “We’re not going to make it.” We landed just in time to shower and change for sound check. We didn’t get back to our hotel until 1:00 AM, it was a blur. I almost feel like I blacked out on stage. I remember being counted down, but I don’t remember performing. It was just so overwhelming.

Was there ever a backup plan to music? Is there anything you passionately love?
I don’t know what I would be doing if it wasn’t for music. I never really had a second option. I’ve always loved words. I knew I would do something with words. If it weren’t music, perhaps it would be poetry. Poetry is the one piece of me that I keep to myself. There is not a second option because this is what I was born to do.