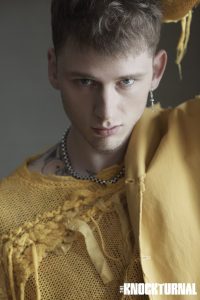 Rain crashed against the foggy top-floored penthouse New York City corner office windows, as sirens roared from below – creating a fitting ambiance and introduction for the rapper and self-proclaimed wild boy, Machine Gun Kelly. In the past years, MGK, Born Colson Baker, 27, defied the odds by overcoming a dark adolescence in Cleveland, Ohio with limited guidance. His social media credits some of his influences as, “tattoo pain” and “the girlfriends’ of all the haters I’ve had sex with,” making his warm demeanor and scholarly tongue a bit of a mind fuck. “I’ve definitely been someone who openly speaks out on what his influences are. It’s not just Hip-Hop, which most people would predict,” said the bled, fearless rhymer, MGK.

His complex relationship with his parents left him with more than growing pains, as he’s survived depression, addiction, and homelessness – all highlighted on his introductory independent mixtapes. This real-life pain and loner mindset only influenced MGK’s gift for storytelling. Eventually, earning his music an award for the “Best Midwest Artist” at the Underground Music Awards. Soon, the gates opened for the South by Southwest performance that changed his life.  The legendary Sean “P. Diddy” Combs became further intrigued by MGK’s sound, they had met prior, but no business was discussed. Following MGK’s energetic performance, Sean Combs signed him to Bad Boy Records, and the rest has been splashed across headlines ever since.