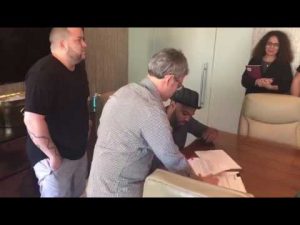 The urban alternative singer/songwriter was born in the Dominican Republic, and raised in Madrid, Spain. His conscious messages are fused with hints of acoustic flamenco rhythms and hip-hop, easily distinguishing himself from other performers. The remainder of Roc Nation Latino’s long-awaited roster inked along following. We can’t wait to see what happens next!

Get to know Roc Nation Latin’s freshest face with his new track above.

Note: This story was written prior to Billboard release for The Artistry Records