I rolled over in my bed and looked out the Philadelphia window to sunbeams and a massive Eagles billboard. I almost became concerned that my snug, off-the-shoulder dress I had chosen to wear to Budweiser’s Made in America Festival (BMIA) would be deemed offensive. Keyword: almost. Day 1 was Rihanna day, to me, anyway. In true RiRi fashion, my confidence was leading. In my little black dress, my Latina curves and I strutted to pick up our credentials.  We hadn’t travelled all this way to body shame or play games. But it got real as soon as I reached the press tent. 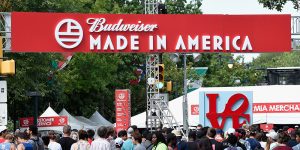 BMIA is where even the most sugar-coated women aren’t too cute to grab a cold one. Somewhere between Milly Rocks and beer swigs, reporters gawked as Lil Uzi Vert frantically ran away on his hometown’s festival grounds from his stampede of fans.

SZA was much needed as crowds unrelentingly mobbed. Her glowing vibes and soft vocals mellowed the festival-goers even though she was wearing a (most appropriate) “F–k Donald” shirt.

Before I knew it, I was in the middle of a mosh pit. My stomach was in knots watching men drunkenly climb light poles above me to view the stage. A group of frat boys offended my uber-nerdy Dominican digital designer asking if he was a drug dealer, leaving him perplexed. 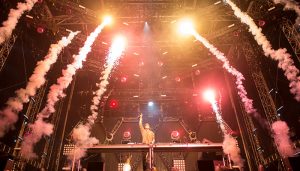 I took the woman crowd surfing overhead as my cue to head to the media tent.  Security was polite and accommodating to the journalists.  However, to my dismay, a tan deficient man approached me quizzically, asking, “Who are you here with?” I told him I was with Latina, and he cross-examined my credentials. He sarcastically replied that wasn’t aware of Latina (like, really?) and I swiftly checked him. I said, “Yes. The Latina Magazine is here. Be aware.”

I looked to my left and right— I was the brownest thing in sight. Yet, it all became transparently clear to me: no jerk was going to block my RiRi blessings or denunciate my behavior based on my pigment. In no time, I was back to doing me, singing lyrics off-key with Bryson Tiller. One monkey doesn’t stop my show, ever.

At last, out twirled Rihanna in a cheeky green bodysuit and custom-made, thigh-high Giuseppe Zanotti boots. Boss! Boyfriends were forced to prop their raging girlfriends on their shoulders. The Barbadian goddess informed her audience, “I’m not actually made in America.” Still, BMIA selected the most dope headliner. We love Rihanna because she is unashamed feminist magic at its craftiest. Women like Rihanna balance out the universe.

Like brunch, it’s never too early to drink at BMIA. Nevertheless, day 2 began a bit more amorous. There’s something so exquisite about soulful white men. Like Robin Thicke or Justin Timberlake, newcomer Kevin Garrett made the ladies swoon. It was nice to have a touch of the feels — however, they didn’t last long.

Brooklyn’s own Desiigner TIDAL stage set was energetic, but there was one emcee more hyperactive than him: Travis Scott. Although La Flame made it clear that he wanted a night set at the festival, the stunts commenced, anyhow.  He climbed a tree (yes, a tree!) to perform “3500.” The level of his fans’ litness was overwhelming. He wrecked his show and left. 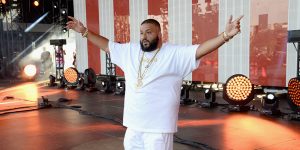 Beats blared and fans jumped off the Ferris wheel to rush to the main stage for one DJ. Bless up! DJ Khaled, fresh off Beyonce’s Formation World Tour, paid homage to the queen on her birthday. Truthfully, I believe every day is Yoncé’s day. DJ Khaled certainly brought out Philly’s finest, but what was most prominent during his set was his graciousness. He thanked the Most High for his blessings numerous times.  It became evident why he’s been having such an amazing year: he exudes love in abundance.

The easily spottable Budweiser swing wasn’t the only thing that would leave them spinning. Welcome to Project X, better known as the phenomenon that is Martin Garrix. Smoke machines, fire, trippy graphics, neon lights and rampant EDM music created a chaotic atmosphere. For close to an hour, Philadelphia felt like the night in Vegas I failed to mention to my father. But, I digress. 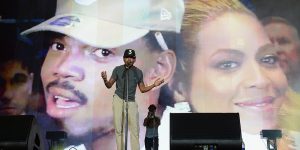 Kanye West’s underrated protégé Chance The Rapper’s optimistic stanzas place him in a lane of his own. His debut, Coloring Book, may have secured his superstardom. The Chicago-bred artist served as the perfect introduction to the final act.

Coldplay appeared, showing what legends are made of. The British rock band turned BMIA into a modern-day Woodstock Music Festival. A gathering painted red, white, and blue with American flag attire watched in awe of Coldplay’s act. Even Beyoncé was visibly pleased, singing along to “Hymn for The Weekend.” Coldplay’s melodies tied couples tight to one another and their light show created festival magic. Once again, affection appeared, artfully timeless. As the final night of BMIA concluded, despite a few stereotype setbacks, I admired some of the young love surrounding me, drenched in all of its beautiful delusion.