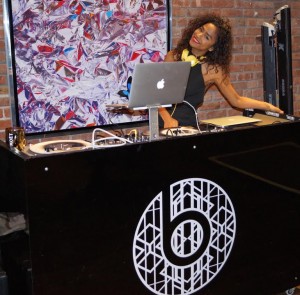 This is one of my favorite shots from a past visit at the #BEATSNYC house. The Beats By Dre staff was incredibly welcoming; and I was most surprised with Vashtie’s ability to interact with everyone while she DJ’ed.  They don’t call her Downtown’s Sweetheart for nothing.  Peep this week’s #WCW credentials below.

Bio: As a New York based director, filmmaker, artist, designer, creative consultant and DJ, Vashtie Kola is truly a renaissance woman.  She has cultivated the Downtown New York City scene for over a decade as a style icon, yet her curatorial outreach and influence spans worldwide. Moving easily among fashion, film and music, she has emerged as “a role model for young tastemakers,” as the The New York Times titled her in a Style section feature profile. Black Enterprise coined her “Vashtie Kola: Curator of Cool.” Vashtie is a graduate of the School of Visual Arts where she studied film and grew up in Albany, New York as a first generation American of Trinidadian heritage.

When she established herself in New York in 1999, she found her way to places like the legendary Supreme skate shop on Lafayette St. in the East Village, where she fell into a vibrant DIY scene. The avante garde press soon declared her “Downtown’s Sweetheart.” Vashtie quickly grew to be a multi-disciplinary force melding art and style with her original and refreshing perspective. “I’m a good representation of the culture in this strange digital era,” says Vashtie.

Vashtie’s approach incorporates a core sensibility that marries the cosmopolitan to an unhinged street aesthetic, which is why Time Out New York once named her “Most Stylish New Yorker.” She challenges the boundaries of gender, beauty, and individuality embodied by the aesthetic of her brand Violette, which she launched in fall 2008. Violette is carried in select boutiques, including Colette in Paris. The distinctive flair found in her designs for Violette has served as a platform for partnerships with brands. In 2010, Vashtie became the first woman to design a Jordan brand sneaker under the Violette signature in an empowering campaign oriented toward girls featuring the tagline was “sometimes the king is a woman.”

Flexing her creative muscles, Vashtie collaborated with Beats by Dre on “Violette Beats” on a New York City taxi themed pair of limited edition headsets released in 2012 and again in 2014 for their #SoloSelfie campaign. She also served as creative director for Billionaire Boys Club/Ice Cream for their Ice Cream Girl brand. Vashtie’s tastefulness has bled into her fashion where in January 2013 DKNY featured her as one of the faces of their 90s Capsule Collection Campaign for Opening Ceremony, alongside super model Cara Delevigne.

Vashtie’ foray into music has proved to be as successful as her creative initiatives with her ”1992″ parties that she organized with friend and partner Oscar revitalizing New York nightlife while revisiting a formative era in her life. The party has also been produced in Miami, Paris and Amsterdam.

Not content being behind DJ boards, Vashtie has found herself behind the camera, directing videos for Justin Bieber (“One Time”), Joey Bada$$ (“Waves”), Kendrick Lamar (“ADHD”), Big K.R.I.T. (“Boobie Miles” and “Insomnia”), Kid Cudi (including a short film), Solange, Jadakiss and more. She also directed the commercial campaigns for the Pepsi Refresh Program that starred Will.i.am and featured LMFAO, which aired at the 2009 MTV Video Music Awards. Vashtie’s approach to the art form of the music video ranges from the surreal to stripped-down, monochromatic and raw.

With her Midas touch and creative brilliance proving to be successful in all of her campaigns, Vashtie shows no signs of slowing down as her brand continues to expand.