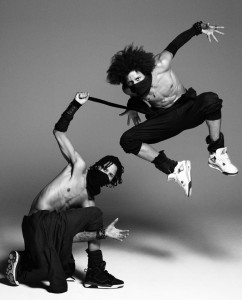 Born and raised in Sarcelles, France, the self-taught dance duo became the darlings of the French audience in 2008 as finalists on the popular television show Incroyable Talent. They quickly rose to prominence in the United States after a video of their performance on the San Diego leg of the 2010 World of Dance tour went viral on YouTube, surpassing over 27 million views as of January 2015.  In 2011 they won the Hip-hop New Style division of the prestigious international street dance competition Juste Debout.

Les Twins have been featured dancers for various music artists, including Beyoncé and Missy Elliott. Standing at 6’4″ (193 cm) tall,  the brothers have modeled for French haute couture fashion designer Jean Paul Gaultier and appeared in many high-profile commercial advertising campaigns.

In addition to teaching their original choreography in workshops around the globe, they are also the founding members of the successful dance team Criminalz Crew.