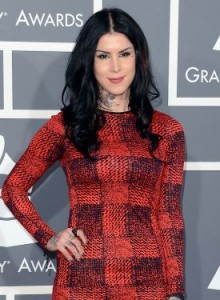 Kat Von D has sparked quite the controversy with “Underage Red,” a lipstick from her Sephora makeup line.

The tattoo artist came under fire earlier this week, with many saying that the name of the lipstick suggests “its wearers are either young girls trying to look sexy, or women of legal age who are trying to look like young girls.”

On Thursday, Von D took to Facebook to speak out about the uproar in a post titled none other than, “Underage Red,” in all caps. “I have never expected everyone to understand or see things the way that I do,” she began.

“With that being said, I can understand why some have found reason to be offended in regards to my choice in naming a lipstick “Underage Red” — but I feel the need to correct those of you who have clearly misinterpreted the name itself, and the inspiration behind it,” the LA Ink reality star continued.

“I should mention first, that I am the sole creative force behind my brand. I am the one responsible for naming every single shade, so I don’t see why anyone should aim any backlash towards such a great company like Sephora, who ultimately has no creative input on such matters.”

Von D then went on to explain where she drew inspiration from for the name, before going on to say “it has NEVER been a goal of mine to inspire sexualization of any sort, let alone promote a destructive lifestyle.”

“If you read the word ‘underage’ and you automatically jump to a disgusting conclusion, I ask you to perhaps question your own mind and thoughts. Consider the damage such negativity can actually cause, verses actually help.”

Per the tattoo artists Facebook post, “Underage Red” is currently sold out but she has no plans of taking it off the shelves. You can read her letter in its entirety here.