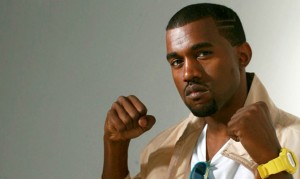 Kanye West made his highly-anticipated return to Power 105’s The Breakfast Club this morning, and as expected, he didn’t hold anything back. During the candid conversation, ‘Ye discussed the Grammy incident with Beck, and revealed that he had actually planned on calling him after the awards to talk about everything that happened, but his schedule has just been too hectic. While ‘Ye shared positive thoughts on Beck, he still stands by his previously stated stance on the Grammys. “The person that won was Beck, because if I hadn’t done that, his Album of the Year would’ve never been mentioned…He should win an award for what he did—Rock Album—but he shouldn’t have won that award,” Kanye said.

Of course, he was asked about the recent drama between his ex, Amber Rose, and Khloe Kardashian, which led ‘Ye to send some shots Amber’s way, saying that he had to take 30 showers before beginning his relationship with Kim Kardashian. Kanye also revealed that if Kim wouldn’t have resisted him in the first place, there would be no Amber Rose because they would never have dated. On the related issue, ‘Ye praised Tyga during the interview for his relationship with Kylie Jenner, which is what sparked off this issues between Amber and Khloe in the first place. “I think he got in early, I think he was smart. They are closer in age than a lot of relationships that I know. I knew Tyga was smart,” said Kanye.

Amidst the talk of all of the drama, Kanye finally gave some info on his new album, and confirmed that he was about 80 percent done with the project. “[It’s gonna be] bars, songs, cookout music that just feels good. My last album was a protest to music, I was like ‘I’m gonna take my ball and go home’…This album is embracing the music, joy. Being of service to the people. I just hope people like it and enjoy it,” Kanye revealed. Kanye also said that his new record, “Wolves,” was inspired by conversations he had with Drake about a joint album they were planning to do, which might still happen. “The song came from a conversation me and Drake had where we were supposed to do an album together—it was supposed to be calledWolves…we said we was gonna do it, he was sending beats back and forth,” ‘Ye said.

As he talked about the album, Kanye mentioned that he will address police brutality on the project, and said that he didn’t get involved in the subject last year because his dad urged him not to. “Yeah, my dad emailed me and said stay out of it. Now, my dad is like a thousand percent smarter than me and a thousand times more social than me. He like literally lived at a homeless shelter and he emailed me and told me to stay out of it—that’s my only parent so I have to listen to him sometimes. I think he was just trying to be protective of his son. I can’t run in front of every bullet, you know. I just can’t run in front of every single bullet.”

Watch the full interview, where he also talks about the adidas Yeezy 750 Boosts, Dame Dash, and more. –Via Complex