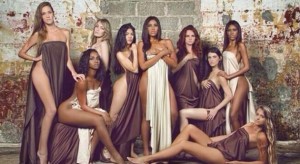 In an attempt to debunk the stereotypes on what exactly a “Dominican looks like,” Twitter user UsDominicans809 posted a photo of a group of beautiful women (er, possibly models?) who are all super diverse in physical identity along with a sassy tweet.

“They’re all dominican; so next time somebody says “you don’t look dominican” tell that dumbass, we’re all unique,” as written by user UsDominicans809.

This comment accurately encompasses the identity struggle Latinos in the U.S. go through day in and day out which is why pieces like “Things You Shouldn’t Say To Latinos,” orAfro-Latinos and the often overlooked pale Latinas do so well. They reflect all the misconceptions that go with the Latino identity.

First, Latinos are not a race, it’s an ethnicity; but you knew that already. Latin America’s diverse racial demographics are the result of a mixed-race background from European, African and indigenous cultures.

But if you didn’t already know… race in the Dominican Republic is way more complicated than in the United States.

Here, you either fall under a handful of categories: Asian, Black, White, India, and so forth but, according to Public Radio International, Dominicans use an array of words to self-identify their degree of “blackness”, for lack of a better term, like: moreno, trigueno, and blanco-oscuro.

Which is odd because “more than 90 percent of Dominicans possess some degree of African descent — and that the very first rebellion of black slaves occurred here in 1522,” according to The Root. But, in the their federal census, most recently, 82 percent designated their race as “indio”, while only 4.13 percent designate themselves as black.

Then again, who would identify with their African-descent in a country that reveres the very man who colonized it? Yes, the Dominican Republic is filled with Christopher Columbus statues and tributes everywhere but I dare you to find the same amount of monuments or statues in Santo Domingo in honor of their African ancestors.

Nope. Nada, right? Which brings us back to the photo that UsDominicans posted.

The white population in the Dominican Republic isn’t as prominent as blacks but they still exist. In facts, whites are one of the four ethnicities in country which are descendants from French and Spanish settlers and others from Germans, Hungarians or Americans.

This attitude matters even more so because Dominicans are one of the major immigrant groups from Latin America to the United States. That’s about 1.5 million and counting. And, of all the Latino immigrant groups, Dominicans in the U.S. are the most likely to identify with country of origin. Now if that doesn’t spell out pride I don’t know what does.

How we self-identify is a huge part of how we see ourselves in society but sometimes how others see us and how they communicate that can leave an even deeper imprint on your psyche.

So, next time someone makes an ignorant remark on your identity know that you have one of two choices: calling them a “dumbass” or using this opportunity as a teaching moment. It’s totally your call.

I prefer the latter but that’s only because these comments have worn me down so much over the years that I’ve reached a whole new level of patience.