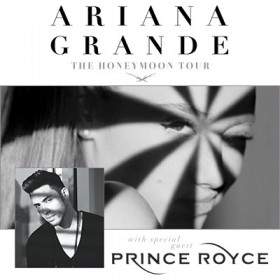 Best news ever? Prince Royce will be taking the stage with Ariana Grande this summer.

The “Stuck On a Feeling” singer took to Twitter earlier today to share the exciting announcement. “I’ll be joining @ArianaGrande on her North American summer tour,” he wrote. “Can’t wait for you to hear new music! See you soon!”

According to a press release, Prince Royce will be a special guest on all dates of Grande’s “The Honeymoon Tour.”

Tickets go on sale April 4 on LiveNation.com. Check out all the dates below to see when Royce and Grande will be hitting your town: