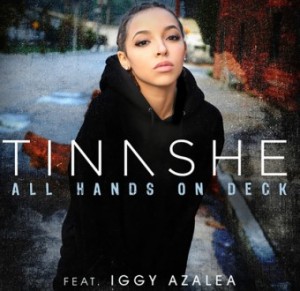 Tinashe gave 2015 a worthy successor to”Fancy” with her Ty Dolla $ign and Charli XCX collaboration “Drop That Kitty.” Now, she’s having the original “Fancy” emcee jump on a remix of her song “All Hands on Deck” — not that the she needed any help in the first place.

The “2 On” singer told TIME in December that she was already working on new music when she stopped by to share some party tips, but the addition of Iggy Azalea to the standout cut from 2014’s Aquarius shows Tinashe isn’t yet done promoting her stellar debut. If the Aussie rapper’s presence makes you uneasy, however, just transport yourself back in time by focusing on the track’s late 90s-early 2000s R&B flutes, courtesy of producers Cashmere Cat and Stargate. -Via Time