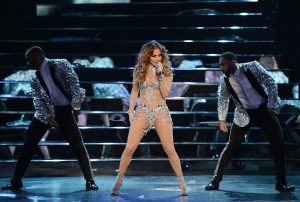 Unlike the barely-there showgirls and past-their-prime pop stars preceding her, this Las Vegas headliner sashays through unparalleled choreography, extravagant wardrobe changes, bilingual poetics, and gyrates a voluptuous Nuyorican bod made by God himself, on All I Have.

Jennifer Lopez’s recently extended residency at AXIS Theater is a strut down memory lane from her Fly Girls days to her beaming star on the Hollywood Walk Of Fame. The multifaceted legend dazzled her audience with a time-honored introduction and reminded 4,600 #JLovers to “dance and be kind to your neighbor.” Her feisty party anthem “Get Right” got Vegas goers moving before Kid Capri and B-boys (dressed as speakers) emerged in the spotlight. Graffiti painted the stage as a sparkling 6 train raced forward towards the crowd. And just like that, we were no longer in Las Vegas. “Y’all wanna take a ride back to the Bronx with me,” J Lo questioned. All present raved, including a beaming A-Rod alongside his daughters, Tashi and Lulu.

Her live 5-band piece joined in for songs “I’m Real” and “Feelin’ So Good,” as fans recited the late Big Pun’s verse perfectly.  Wearing a pair of bedazzled constructs, a skin-tight white bodysuit, and flannel shirt, J Lo and her dancers looked like #BrownGirlFly magnified. It’s no surprise her energetic dance break to Strafe’s “Set It Off,” did just that — making “Jenny from the Block”  her flawless follow up. The once-in-a-lifetime experience included French Montana’s “Shot Caller,” and an ode to the birthplace of hip-hop through Boogie Down Productions’ classic, “South Bronx.”

“This is supposed to be the sexiest city in the world,” Lopez cheered. She switched the mood by changing shoes. Wearing a sultry pair of sky high Christian Louboutin pumps, J Lo ripped off her flannel and revealed what everyone was praying to see. Lil Wayne’s voice soon rang through the audience, while J Lo twirled over the “Into You” beat — right onto a chair. The charismatic melody of her first-ever Billboard Hot 100 No. 1 hit, “If You Had My Love” was swoon-worthy, but her dancer’s body rolling in sparkling two piece sets heightened the experience.  A megawatt groove was set for the raw lyrics on “Booty” as J -to the-L-O flaunted her explosive assets prior to disappearing behind the velvet curtains. 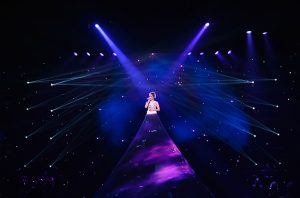 Now musing from 10 feet above the ground, J Lo emerged with a galaxy backdrop, and a personal moment to share — her love for her “coconuts,” Max and Emme. Her never-ending gown dragged on the stage from above, and motherhood showcased well for dedicated songs, “Feel The Light” and, “I Hope You Dance,” by Lee Ann Womack.

“It is not about me. I just want them to be happy,” she declared.

This two-hour spectacle had more extravagant surprises to come. Feathery glamour met an edgier rock persona as curvy women paraded around the “J LO” imprinted stage. “I’m a hard working woman. Where are my hard working women at,” she asked. Aretha Franklin’s “Respect” created overwhelming enthusiasm and transitioned seamlessly into the feminist tune, “Ain’t Your Mama.” Male dancers in glimmering orange suits reminiscent of The Temptations came forth, as trumpets surfaced through the mirrored floor beneath J Lo’s thigh-high boots and golden tasseled dress. Still, the evening would not be complete until the global superstar paid homage to her Latin heritage.

Congas banged over the ultimate salsa explosion of footwork. Celia Cruz’s infamous “Quimbara” thundered and J Lo launched out of an enormous drum wearing a traditional Cuban blue flowing gown. Her impressive vocal range radiated on the Gloria Estefan co-written, “Let’s Get Loud.” “Everybody on your feet,” she commanded, as “Waiting For Tonight” video lights shined over the venue. A visual recap of her career blasted across the stage at the pace of an EDM rhythm. 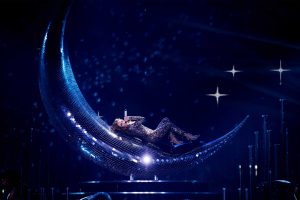 Now seated bruja-like on the moon, Jennifer Lopez spun above her crowd, as glitter rained down for “Waiting For Tonight.” The fan favorite “On The Floor” generated over 1 billion views on YouTube and the concert-goers reaction to Pitbull’s sexy verse on the final number proved why. Sin City has yet to encounter a phenomenon like Jennifer Lopez. The show’s constant uplifting monologues between over-the-top salsa exhibitions is pioneering for the strip’s culture and overall experience. All I Have’s production proves the limitless beauty in passionately chasing your dreams. J Lo is thrilling beyond imagination from the imagery of her humble beginnings to her inspirational climactic conclusion.