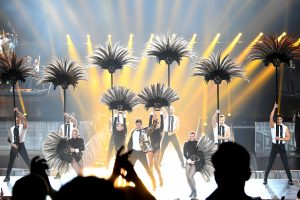 Golden strobes flashed through the pitch black Park Theater as the words “Ricky Martin” began gleaming from above. Soon, the Latin pop sensation dropped down on floating platform with a spirit engorged in beaming enthusiasm. Wearing a gold tinted tuxedo jacket, a crisp white button-down shirt, and black bow tie, Ricky Martin unleashed the noise. “Livin’ la Vida Loca,” is one of the best-selling singles of all time and made his “All In” show attendees jump to their feet. As trumpets blared, show girls waving large feathers strutted from backstage making the follow-up song, “Shake Your Bon-Bon,” that much more Vegas-like.

Paying homage at his latest residency, an ageless Martin belted Frank Sinatra’s, “Luck Be A Lady,” and, “The Lady is a Tramp.” These electric renditions reminded the audience why Martin sold over twenty-two million albums with his self-titled debut English album. Still, the Puerto Rican-born showman had more up his cuff linked sleeves. As over a dozen dancers seductively seated themselves on stage, a racy visual of Martin and lusty police officers unfolded on jumbotrons. The intense run-in left the audience’s hearts pounding, as Martin and his male dancers revolved on cages at center stage. The hectic introduction illustrated well into the hit record, “She’s All I Ever Had,” and Martin began dancing under a thundering rainy set.

The new climatic scene provoked shirtless men to emerge banging on drums for his sultry danceable, “Drop it on me.” The theater wiggled for the Daddy Yankee assisted record chanting, “While you whisper something/ My hands on your hips to watch you give it all/ Drop it mami, drop it mami/ Drop it on me, hey!” When the audience participation was at its peak, Martin invited an eager fan on stage to join in and celebrate. Loraine from Puerto Rico proudly shimmied for the star, alongside the nine-piece band — altering the ambiance before another icon heightened the experience.

Christina Aguilera’s golden locks tousled across the floor-to-ceiling screens, serving as a charismatic backdrop for her and Martin’s popular duet, “Nobody Want To Be Lonely.” This was easily a crowd favorite, as both GA stage pits swooned front-to-back! A vibrant guitar solo transitioned vibes, preparing salsa dancers to shake things up. Soon, pirouetting muses in long gown leaped about the circular-tracked stage leveling the energy. Dapper as ever, Martin donned a white suit, for the Spanish language songs. A video version of Maluma shined for the reggeaton moment with, “Vente Pa’ Ca!”

“I can’t hear you,” yelled Martin, to his 6,000 spastic admirers. The fiery “Un, Dos, Tres,” launching the audience into pandemonium. Decades of images from albums “A Medio Vivir,” “Vuelve” “Ricky Martin,” “Sound Loaded,” “A Quien Quiera Escuchar,” and beyond splashed across theater walls. “Be free, be you. Be with the music and celebrate life,” announced Martin. B-boys ran throughout the venue for the infectious track, “The Cup Of Life.” Honoring Las Vegas tradition, glitter exploded from all angles — echoing his 41st Grammy Awards Performance, in 1999. Screaming, “Wepa,” the man of the hour resurfaced in a neck-to-ankle ensemble of mock tattoos making this his grittiest look of the evening. Ricky Martin expressed his gratitude to all that supported with a massive smile and bowed out. Classy!