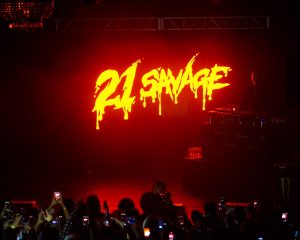 Slaughter gang enthusiasts were vigorously muscling their way through the venue trying to get as close to the stage as possible –  before they could even grab an energy drink.

Monster Energy’s spring #OutbreakTour was Issa Tour. Fans from all over poured in for one of the biggest shows of the 21 Savage excursion.  Tee Grizzley traveled from the West Side of Detroit, Michigan to open the NYC show.  His singles “First Day Out,” and “From the D to the A” earned a few head nods, as most of the New Yorkers present were just becoming familiar with his music.

Young Nudy has been actively promoting his BGUM trap songs on the Slime Balls mixtapes. He ran across the stage following Grizzley, and prepared the audience for the movie to come. Singles “Yeah Yeah,” and “Trapaholic” kept bodies at the show shaking. But New York City was buzzing for the hometown hero of the evening – Young M.A.

For Full Article Go To The Knockturnal 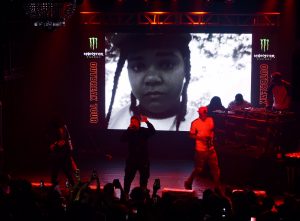