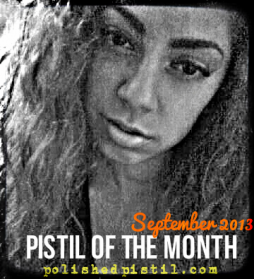 Last month was a little bizarre for me.  I consistently write about others and a journalist cared enough to write about my life. God works in mysterious way. I still have a long road ahead of me but the article below represented growth. This is the beginning of my journey; hope you enjoy the feature.

Pistil of the Month

“I’ve always been a misfit; I grew up ‘different.’ Most of the people here [Universal Music] have extremely imaginative minds. They are the dreamers; they are the kids who were ‘awkward.”- Bianca Alysse

Behind the “thick skin”, wisdom beyond her years and piercing brown eyes, it’s hard to believe that this woman was ever a “misfit”.

Bianca Alysse Mercado, an Executive Assistant for Compound Entertainment that works directly for NE-YO’s Marketing and Branding Director, was born in The Bronx to a traditional Puerto Rican household.

“My father was a graffiti artist and my mother an ‘around the way girl.’ I had teenaged parents but they were very strict. My mother is a stern, no nonsense type of woman, so I’m pretty ‘black and white.’ We were brought up to believe that family and loyalty were two of the most sacred possessions ever.”

As a child born in the borough where Hip-hop began, it’s no surprise that she has always been drawn to music. “I have been obsessed with music for as long as I could remember.— [As a child] I was always singing and dancing around my house; I could never sit still.” Shortly after her time in the Bronx, her parents decided to relocate to Woodbridge, Virginia. It was in Woodbridge that Bianca attended Potomac High School. There, she produced grades so impressive that it would result in an academic scholarship to Norfolk State University (NSU), where she also danced all four years.

“Woodbridge, VA kept me out of trouble. It allowed me to have different opportunities I do not think I would have had in the Bronx.”

Attending NSU, dancing for NSU all four years, and then going on to become the first in her family to earn an undergraduate degree, was not enough. So she risked everything she had come to know, and moved back New York City to pursue a career in her passion; music.

“I gave up my car, apartment, steady job, and old life to be here. I was willing to do whatever it took to be successful. It was the biggest leap of faith I ever took. You can’t be scared to fail. But, more than just giving up all of my material things, I also gave up my past. It was scary not knowing what was coming next but I wanted to win. I thought I was crazy a million times, but [it’s important to remember], you end up with the life you settle for. At one point, I wanted to quit. Non-believer’s words can affect you if you allow them in your head. Those that are not supportive should not be [apart of your life].”

How exactly does one gain enough faith to make such a drastic move?

“I learned to put myself first. In order to be the best woman you can be you have to love yourself before anyone else can. You have to be willing to be your own hero sometimes. My fight for my career was a testament to that. It wasn’t until now that I began to understand how important it is to have your own back; it’s not selfish, it’s life.”

Her authentic and honest outlook on pursuing her dreams carries over into what she believes we should do as women, how to handle love, and her thoughts on being a teen.

“Women are the most beautiful creations in the world; we nurture, provide, build and are absolutely boundless. There is nothing a determined woman cannot accomplish. As women we need to be better about being kind to other women. There is a constant competition with these social networks. It gets incredibly petty. We don’t live on reality TV, we [shouldn’t want to be] ‘bad b——.’ We need to be more concerned about being beautiful and intelligent women. Women should be bold enough to be who they are.  It’s a new day, men no longer dictate what we can do, how we should behave or what we can become. Women can create life, being a woman is powerful. Embrace who you are.”

“Too many women are willing to sacrifice themselves just to hear someone say, ‘I love you’ at night. To love is to honor one another, spiritually, emotionally and respect each other’s wishes. Love requires discipline.  Love should be enthralling, it should be over the top, passionate and you should be loyal to one another.  In a relationship you should have each other’s back above everyone else’s. That is what I hope for. If it is not along those lines, I do not think it is my time for love.  You can’t halfway be in love; you have to be willing to hold one another’s hands through the trenches. Our generation does not typically respect love. A person can’t truly be ‘the best thing that ever happened to you’ if your constantly put tears on their face. Love doesn’t do that.”

“Don’t be in a rush to look grown or be grown. The simplicity of being a teenager is something you will tremendously appreciate when you look back on life. I’ve spent time running from myself so to speak… It’s the most defeating thing you can do. To suppress your own mind and spirit makes absolutely no sense. Everyone was built a specific way to fulfill a purpose. Be YOU!”

When asked what was her ultimate goal as a woman and as a human being, Bianca responded:

“My ultimate goal as a woman is to make a difference. As a human being, I just want to be the type of woman that transforms things for the better.   One of my goals is to place a performing arts center in the Bronx, preferably Kingsbridge Heights. A gift for under privileged children/ young adults. I did not always have the resources I dreamed of growing up. These types of establishments make all the difference. Creative children need a safe place to express themselves.”

Although it is obvious as to why Bianca is September’s Pistil of the month, I will reiterate:

Bianca was bold enough to leave everything comfortable in order to pursue her dreams in NYC. She allowed her faith to dictate her steps instead of focusing on the fears that could have kept her from being where she is today. Bianca is pro-woman and believes in the importance of class (putting yourself first), strength (education) unity (“less egos more love”) among us all.

And the noblest reason of all, Bianca’s ultimate goal as a human being is to give back to her community and provide for those in need.